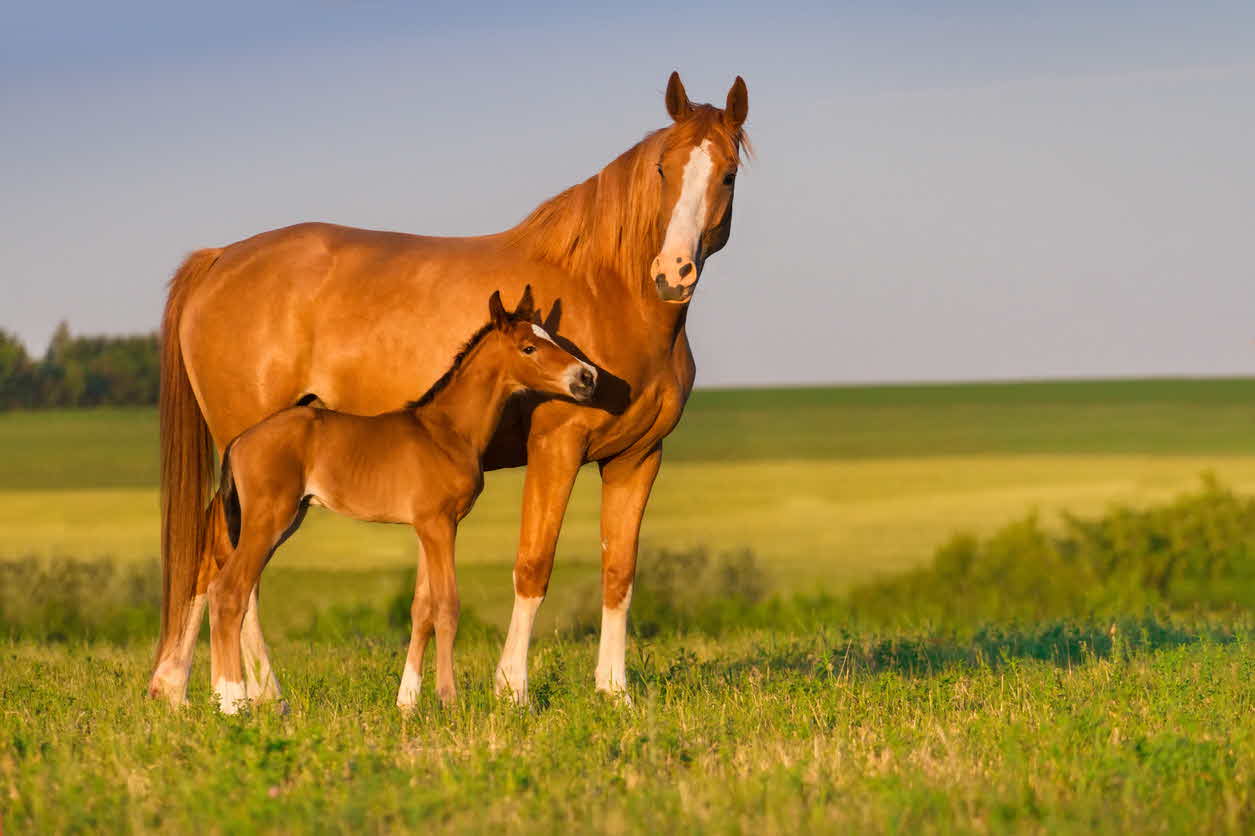 Breeding your mare and getting her to full term can be a long and expensive process, congratulations on getting this far. Foaling your mare down is the last and very important part of this and therefore it is important to have knowledge of the normal foaling process. This will allow you to identify problems early and know when to call your veterinarian for help. The gestation period (duration of pregnancy) can vary between mares and range from 338 to 365 days. Although there is great variation between individual mares, each mare tends to have her own fairly consistent time of gestation.

During the time leading up to foaling, mares should be vaccinated and wormed. It also is important that the mare is receiving adequate nutrition but not be overweight during late pregnancy. Prior to foaling, she should be moved to a clean, safe environment where she can be monitored closely. You may decide to have her foal down at a breeding facility where there are dedicated staff. Take into consideration how far away your veterinarian is and have a discussion with them well in advance of her foaling date. You should also ensure that if the mare has had a Caslicks procedure that you have arranged to have this opened by your vet. There are several methods to predict when parturition is imminent. The exact time she will give birth is often not readily determined. Some common findings when foaling is imminent include:

To help detect the onset of foaling, a foaling alarm may be used. The alarms vary considerably in cost and type. These are not failsafe and nothing can replace regular checking of the mare. Signs to watch out for during late gestation include premature lactation (running milk) as this may mean the mare loses the colostrum, which is vital for the foal’s immunity. Another sign is vaginal discharge, both of these signs may indicate an infection of the placenta.

The three stages of foaling

Stage 1 (The onset of labor)

Stage one begins with the onset of contractions and generally lasts one to two hours. The mare becomes restless and anxious, she may kick at her belly, look or bite at her flanks and start sweating. She may also frequently raise her tail and urinate. It is common for a mare to stand up, lie down and roll several times in an attempt to properly position the foal for delivery. During stage one the foal rotates from a position on its back with forelimbs and head tucked towards the tail to a position where the head and forelimbs are extended, one forelimb slightly in front of the other towards the mare’s vulva. The contractions move the foal through the cervix and into position in the birth canal.

Stage 2 (The birth of the foal)

Stage two begins with the rupture of the outer placental membranes (allantochorion). This results in a sudden gush of fluid, which may be confused with urination. The inner membranes (amnion) which are white and translucent will then become visible at the vulva. The foal’s feet should be present at the lips of the vulva within 5 minutes, often still within the membranes. The mare usually lies down on her side during this stage and with each contraction the foal advances further through the vulva until fully out. This stage is rapid and should be completed within 15 to 30 minutes after the rupture of the placenta. If there is no significant progress within 10 to 15 minutes after the membranes rupture, call your veterinarian immediately.

Normal presentation of the foal resembles a diving position, with front feet first, one slightly ahead of the other, hooves down, followed closely by the nose, head, neck, shoulders and hindquarters. If you notice hoof soles up, the foal may be backwards or upside down, and you should call your veterinarian immediately. If you suspect any deviation from the normal delivery position, call your veterinarian. If caught early enough in labour, your veterinarian may be able to reposition the foal for a normal delivery. Unless it is considered an emergency, you do not need try to pull out the foal. An exception to this rule would be a “Red Bag Delivery”, because the foal can suffocate unless delivered promptly. This occurs when the placenta (which is red and has a velvet appearance), rather than the foal is seen first. This indicates that there is premature placental separation. It is an emergency and the placenta needs to be opened and the foal delivered as quickly as possible.

You should never pull on the foal to assist delivery with anything more than your own muscle power, and pull only during a contraction (when the mare is straining). Improper pulling risks damage to the mare’s reproductive tract and injury to the mare or foal which can be fatal.

Stage 3 (The passing of the placenta)

This is often overlooked but this is a vital part of the foaling process. The placenta should be passed within 4 to 6 hours after foaling. If the placenta has not passed within 6 hours, call your veterinarian for advice. A retained placenta can cause serious problems, including infection, laminitis and toxaemia. It is a good idea to keep the placenta for your vet to examine later for signs of tearing or infection.

Despite all that could go wrong, thankfully a majority of mares will foal unassisted, often when alone or at night. If parturition appears to be occurring normally there is no need to intervene. Immediately after delivery, allow the mare and foal to rest as long as possible giving them an opportunity to bond undisturbed. The umbilicus should break by itself, and the stump can then be disinfected with a product obtained from your vet. The foal should start to move around attempting to sit up and stand soon after birth. The foal should then be standing within 1 hour of birth and seeking the mare’s teats within 2 hours for milk. Once the foal is drinking the foal often starts to pass meconium (dark, firm, tarry faeces).

When to call the vet during foaling:

It is advisable to arrange for your vet to examine the mare and foal within the first 24 hours post foaling.

This content was originally published by Equine Veterinarians Australia (EVA), a special interest group of The Australian Veterinary Association.