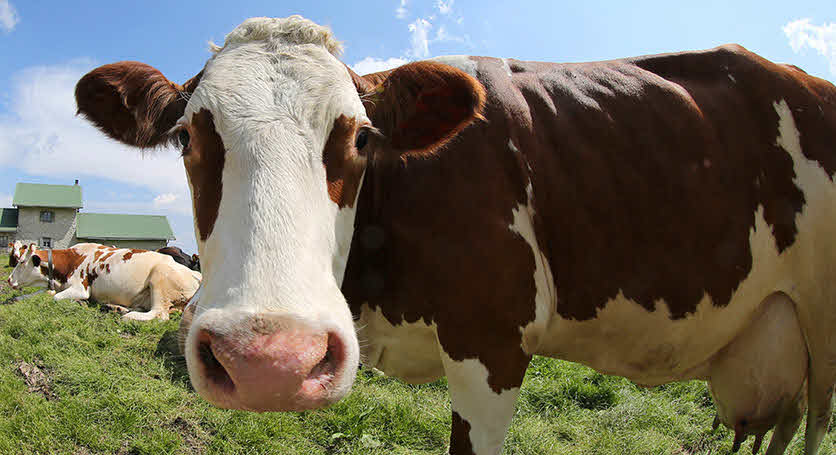 As you drive past fields full of cattle, you might have noticed that they don’t all look the same. Other than the wide spectrum of colours that cattle can come in, there are also differences in body type.

Some common breeds that belong in this group are the Angus cattle, Herefords and Charolais cattle. The Bos taurus indicus breeds on the other hand are often taller, with floppy ears and a large hump between their shoulders. These breeds originated from the Indian Zebu cattle and include breeds such as the Brahman.

In Australia, all dairy cattle breeds used in commercial production belong to the Bos taurus taurus subspecies, meaning they originated in Europe and the Middle East. Common breeds include the Holstein Friesian, Jersey and Guernsey. Holstein Friesians are the most common breed, and they are very distinctive with their black and white pattern. Jersey and Guernsey cows tend to be a lot smaller than Holstein Friesians and are generally tan or brown with large eyes. Dairy cattle breeds have been bred over hundreds of years to produce large amounts of milk.

This is their key difference from beef breeds, as they produce milk in excess of what their calf needs. Holstein Friesians tend to produce large volumes of milk with low fat, whereas the Jersey and Guernsey breeds produce slightly lower volumes but with high percentages of fat.

Commonly used breeds of beef cattle in Australia include the Angus (all black), Hereford (red and white), Charolais (white) and Brahman (floppy ears and a large hump between the shoulders). However, often beef breeds are crossed to give additional traits to the cattle such as tick resistance or fat marbling of muscle (a trait commonly carried by Wagyu cattle). Beef cattle are stockier than dairy cattle and the cows of beef breeds only produce enough milk for their calves, unlike dairy cattle.

Another major difference between beef cattle and dairy cattle is their geographic distribution. Dairy cattle are very sensitive to heat, so they are typically kept in cool climates with relatively high rainfall. Beef cattle (particularly Bos taurus indicus breeds) can tolerate higher heat levels, so can be kept across a much larger region of Australia.

Next time you drive past cattle in a field, take a moment to note their colour, size and geographic location. By piecing together this information, it won’t take long before you can pick your Holstein Friesians from your Brahmans!

We know from the multitude of animal diseases out there that size is no barrier...
Hairy caterpillars harm horses

ACT Government officials will now be able to make a decision to euthanise a dog...
ACT Dangerous Dog Legislation