I was lucky enough to catch up with Dr Myriam Baranger-Ete in Singapore recently where she was offering mobile referral small animal abdominal and cardiac ultrasound services. At the time, I already knew that Myriam was an excellent sonographer and diagnostician, a passionate clinician and mother of three children. Not to mention two Weimaraners. What I didn’t know was that the woman who had just finished scanning a guinea pig to rule out the presence of polycystic ovaries had originally wanted to be an equine veterinarian.

Dreaming of a career in veterinary science from an early age

Myriam grew up in Burgundy (France) and like many fellow veterinarians, her aspirations to pursue a career in veterinary medicine started young.

In fact, she recalls being around five or six-years-old when she decided that being able to look after the ponies she rode would be “it” for her.

Myriam obtained her veterinary degree at Maisons-Alfort National Veterinary Faculty (one of the four National French Veterinary Schools), and at the conclusion of her studies received a scholarship for an equine internship at the University of Montreal, Canada.

She loved it there and was planning to specialise as per plans for a career in equine medicine.

Life, however, decided otherwise. Her husband-to-be was sent to Hong Kong for (what was meant to be) a sixteen month period of work and Myriam made the very hard decision to let go of her residency project to follow him there.

It was 1999 and Hong Kong had recently been relinquished to the People’s Republic of China from Great Britain, so it took about a year of flying back and forth to Europe to get Registration papers sorted out and her Doctoral thesis finalised.

To pursue her veterinary career locally, she gave up her equine dreams and began working in small animal clinics, where she has stayed for 20 years!

She laughs now and says that the diversity and unpredictability of the profession is one of the things she loves the most, but that initially for someone who spent her years at veterinary school thinking anything weighing less than 200kg wouldn’t catch her interest, it was a bit of a change.

In fact, Myriam says she felt somewhat ‘underprepared’ and ‘mildly distressed” at the prospect of treating more petite patients, how I imagine many small animal veterinarians would feel if confronted by a goat or pony in the waiting room. However, recognising she had no real time to laugh (or cry) if she was to practice small animal medicine to the standard she aspired to, she began some placements to get her confidence up, followed by full-time work.

The beginning of a career in small animal medicine

Here, Myriam’s passion for small animal medicine was truly ignited. She found it both fascinating and varied, realising that she wanted to extend her knowledge in the field.

Following her mentor’s advice, she commenced a European Master of Small Animal Veterinary Medicine, which was hosted by the University of Luxembourg and coordinated by the European School of Advanced Veterinary Studies (ESAVS). This Professional Master involves participants flying to different universities in Europe in order to get to work with the European leaders in each specific discipline. For example, Myriam focused on Internal Medicine and Imaging, which took her to places such as Utrecht University (the Netherlands) for Internal Medicine; Luxembourg and Italy for Diagnostic Imaging; and Bern (Switzerland) for advanced training in Emergency and Critical Care.

For Myriam, this intensive training programme and focus on Internal Medicine and Imaging crystallised the belief that “early and accurate diagnosis is key to a successful therapeutic outcome”. Resultingly she became “obsessed about being able to generate and read images that could allow [her] to make an early diagnosis and treat (or try to treat) [her] patients more effectively.”

It was at this time that she focused on training in Advanced Ultrasound techniques (Abdominal & Cardiac). She first shadowed and then assisted a visiting ultrasonographer from the US, both in Hong Kong and in his overseas courses. An intensive and ambitious training program was put together to hone her skills.

Here, Myriam recalls having a sore wrist from holding and maintaining various cardiac views in course demonstrations while the speaker (“very slowly it felt”) explained their finer points. This makes her smile today, claiming “no pain, no gain” and laughing that during summer her right bicep has people occasionally asking if she plays tennis.

Launching a first in Hong Kong

During 2013, Myriam and her mentor decided to launch the first Mobile Ultrasound Service in Hong Kong. Their aim was to be able to support the community of veterinarians (and consequently their patients) by offering referral ultrasound service in-house allowing cases to receive diagnostic imaging locally.

Six months later, alongside additional local partners, they were launching the first Veterinary Specialty laboratory. This would fill a gap in Hong Kong veterinary diagnostics as previously many samples had to be sent overseas and there was no specialised veterinary pathology service. 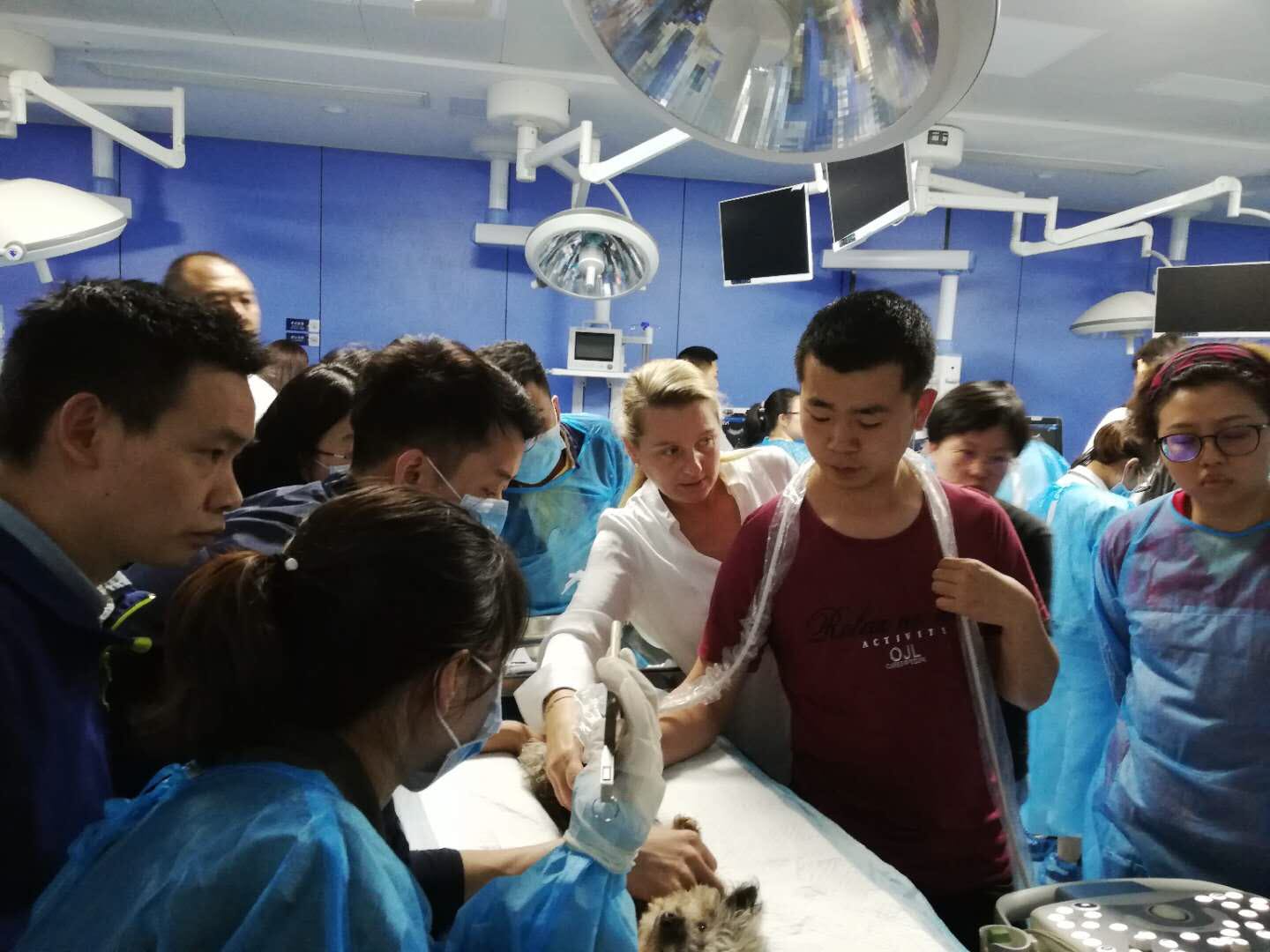 The mobile ultrasound and lab worked synergistically, creating a scenario where ultrasoundguided samples taken in-clinic could be read by the best specialists in the world.

Myriam admits that being involved in projects that allowed the local community to access international expertise locally was amazing and fulfilling. She thrived off being able to give back to the local veterinary community that had supported her when she arrived and helped shape her into the veterinarian she “wanted to be.”

The varied nature of the veterinary profession

When I observed that she had had roles far beyond that of what the public envisage for veterinarians, Myriam reflected that the capability of the veterinary profession to provide us with “multiple jobs within a profession” is quite unique. As she experienced “being able to be a clinician, manager, educator, business owner and business developer – you can have many lives in one – just being a vet!”

When asked about her most interesting and favourite cases, Myriam’s answer was varied.

She acknowledged that the one downside of being in a referral service is the inability to handle the case the whole way along. However, rather than building rapport with owners, you get to build rapport with veterinarians instead, which is very special and rewarding.

The exception to this rule was a unique case, where a dog required a monthly pericardiocentesis procedure for an inoperable cardiac mass. During the six months of treatment, Myriam became incredibly fond of both the patient and her family, noting “the human interactions that animals can create, and trigger are part of the magic in our profession”.

Why do consumers think vet services are...

The growing importance of pets in people’s lives means that people are prepared...
Why do consumers think vet services are...

This month we caught up with Susan Bibby, who started her career as a poultry...
Introducing Susan Bibby of Myvet...

As a final year veterinary student it can be tempting to accept the first job...
The first job search

Why I'm a veterinarian: Stephen Reinisch

Even though I’m relatively fresh to the industry, I have been able to experience...
Why I'm a veterinarian: Stephen Reinisch